From my experience, way too often CI/CD pipelines suffer from the lack of security and general configuration consistency. There still might be an IaaC solution in place but it usually focuses on delivering a minimal functionality that is required for building a product and/or recreating the infrastructure if needed as fast as possible. Only a few of CI pipelines were built with security in mind.

I liked Powershell DSC for being native to the Windows stack and intensively developing feature modules to avoid gloomy scripting and hacking into the system’s guts. This makes it a good choice for delivering IaaC with Windows-specific security in mind.

First, a short introduction of Powershell DSC in the Pull mode. In this configuration, DSC States or Configurations are deployed to and taken into use by the Pull server. States define what our node system configuration needs to look like, which features to have, which users to be admins, which apps installed etc – pretty much anything.

Each State needs to be built into the configuration resource of specific “.mof” format. Then, the state.mof need to be placed into “Configurations” folder on the Pull server together with its checksum file. Once the files are there, they can be used by nodes.

The second piece of config is the Local Configuration Manager file. This is the basic configuration for a Node that instructs it where to find the Pull server, how to get authorized with it and which states to use. More information is available in the official documentation.

To start using the DSC, you need to:

After this, a node contacts the Pull server and receives one or more configuration according to its LCM. Then, a node starts a consistency against the states and correcting any difference it finds.

Splitting states from the Security perspective

It is the states that are going to be changed once we want to modify the configuration of enrolled nodes. I think it is a good practice to split a node state into pieces – to better control security and system settings of machines in the CI/CD cluster. For example, we can have the same security set of rules and patches that we want to apply to all our build machines but keep their tools and environment configurations corresponding to their actual build roles.

Let’s say, we split Configuration of Build node 1 into the following pieces: 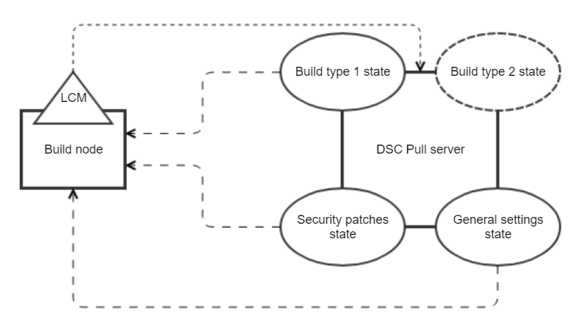 In this case, we make sure that security is consistent across CI/CD cluster no matter what role a build machine has. We can easily add more patches or rules, rebuild a configuration mof file and place it on the Pull server. The next time the node checks for the state, it will fetch the latest configuration and perform the update.

In the next post, I will explain how to build a simple CI pipeline for the CI – or how to deliver LCMs to nodes and configuration mof’s to Pull server with using a centralized CI server.

The principles behind the SDL were born as a response to the Windows Longhorn project reset in the early 2000s. Back then, the entire project was wiped out and started from scratch due to the presence of critical vulnerabilities in various components – according to MS insiders. At the time, Microsoft had a questionable reputation with regards to security of its products. Therefore, the company made a huge investment in security improvement. SDL was created as the common approach to developing products, starting from the very bottom to top – from design to release.

The book was published in good old 2006, which can be seen as the Stone age comparing to the threats and attack vectors present nowadays. Nevertheless, it still remains a valuable source of knowledge and actions for the teams and companies that struggle with improving a security of the products. In my opinion, it is impossible to deliver a secure solution without integrating SDL principles into every chunk of the development process.

The most recent overview of SDL can be found at the dedicated Microsoft page.

The best part of it is the set of tools and instruments designed and used by MS at each of the steps of SDL – with links for downloads. It can be seen as a great reference to the spectrum of problems that SDL solves – you don’t have to replicate it to your organization in the exact way it works at MS but at least it helps understand the challenges and possible solutions.