I don’t have to explain why connecting with RDP to a remote server is a really really bad security practice. By default, Windows has no timeout on a disconnected RDP session. In fact, after you close your RDP session, your user (some kind of admin, right?) stays logged in to the server and God knows what happens when you don’t watch! For example, anyone who gains access to the same server as a non-privileged user can dump in-memory credentials and steal your remote session (i.e. with help of the infamous Mimikatz tool).

How to mitigate this problem? Don’t connect to servers with RDP. Ever! Microsoft believes that the solution is using WMI (Windows Management Instrumentation) via Powershell. At least, it protects you from those guys who wait in the server for you to log in to steal your credz. Sounds great but I want back my GUI, right?

Luckily, we’ve just got a tool for it – Project Honolulu. It executes PowerShell WMI commands in the backend and streamlines framework’s capabilities through the lean (and flat, of course!) UI. It allows you to perform most of the operations you would typically make in RDP. Hyper-V and Failover clusters are also supported. 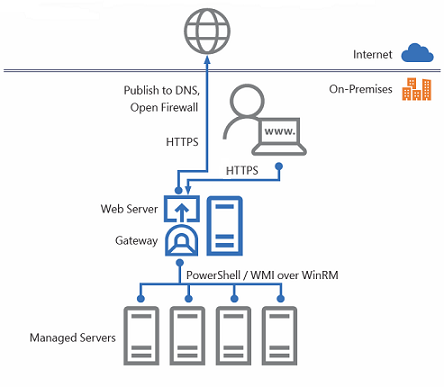 Nowadays, the tool is in the Technical Preview but “it perfectly works in my environment” (c). Download it here.

Some screenshots from my Honolulu:

It covers most common operations such as modifying firewall rules, local groups, checking logs, registry, resource utilization, installing new roles and features, and so much more!

From my experience, way too often CI/CD pipelines suffer from the lack of security and general configuration consistency. There still might be an IaaC solution in place but it usually focuses on delivering a minimal functionality that is required for building a product and/or recreating the infrastructure if needed as fast as possible. Only a few of CI pipelines were built with security in mind.

I liked Powershell DSC for being native to the Windows stack and intensively developing feature modules to avoid gloomy scripting and hacking into the system’s guts. This makes it a good choice for delivering IaaC with Windows-specific security in mind.

First, a short introduction of Powershell DSC in the Pull mode. In this configuration, DSC States or Configurations are deployed to and taken into use by the Pull server. States define what our node system configuration needs to look like, which features to have, which users to be admins, which apps installed etc – pretty much anything.

Each State needs to be built into the configuration resource of specific “.mof” format. Then, the state.mof need to be placed into “Configurations” folder on the Pull server together with its checksum file. Once the files are there, they can be used by nodes.

The second piece of config is the Local Configuration Manager file. This is the basic configuration for a Node that instructs it where to find the Pull server, how to get authorized with it and which states to use. More information is available in the official documentation.

To start using the DSC, you need to:

After this, a node contacts the Pull server and receives one or more configuration according to its LCM. Then, a node starts a consistency against the states and correcting any difference it finds.

Splitting states from the Security perspective

It is the states that are going to be changed once we want to modify the configuration of enrolled nodes. I think it is a good practice to split a node state into pieces – to better control security and system settings of machines in the CI/CD cluster. For example, we can have the same security set of rules and patches that we want to apply to all our build machines but keep their tools and environment configurations corresponding to their actual build roles.

Let’s say, we split Configuration of Build node 1 into the following pieces:

In this case, we make sure that security is consistent across CI/CD cluster no matter what role a build machine has. We can easily add more patches or rules, rebuild a configuration mof file and place it on the Pull server. The next time the node checks for the state, it will fetch the latest configuration and perform the update.

In the next post, I will explain how to build a simple CI pipeline for the CI – or how to deliver LCMs to nodes and configuration mof’s to Pull server with using a centralized CI server.

Windows Management Framework 5 (aka Powershell 5) fails to install if your Windows was installed with a different locale than en-US. In my case, it was en-GB, so it is not a big deal, right?

Well, not exactly. After downloading WMF 5.0 update package,  it fails to apply the update   – saying “Update is not applicable to your computer”. Do not expect to get something more verbose, neither find any useful information in system logs.

After desperate surfing through MS support tickets and trying different fixes, it turned out that the last suspect was the locale configuration. Ironically, that MS support engineers from Seattle couldn’t verify the problem since they all have en-US Windows installed.

So far, the only working way to install WMF 5 (which means, PS 5.0) if it fails to apply the update is to change the locale setting – which is a non-trivial task. It requires running the system DISM utility in the Offline mode (when current Windows installation is not loaded). Also, it requires obtaining en-US language pack .cab archive. And finally, you may even brick your boot configuration if don’t run it properly. Sounds exciting, let’s start then!

This is it! I hope, MS folks will fix this issue soon – so the update can be applied to a system with any locale.

Today, I read through the support thread of one guy who ended up paying to a customer support from MS to get rid of a nasty Exchange server.

And, I must admit, it is not something that can be removed with ease.

! The following manual will help you to annihilate the Exchange server and its data. If you still wish to save some of it, don’t use this instruction.

Let’s say, you need to completely wipe it out from the machine – and uninstaller always fails to remove so-called Default Mailboxes.

There are a few types of them which you need to take care of manually:

Now,  you need to get rid of “-Arbitration” mailbox but it is not as easy as previous cases. Firstly, go and find out the name of your Mailbox Database:

It will show you something like “Mailbox Database 12212842873428”. Use the entire name, no0t just a number! Now, you can remove all Arbitration mailboxes:

It will fail at the last mailbox which is using some default address book (are you still following the actual meaning of these error messages? Not sure if it is physically possible…)

So, to remove the default Offline Address Book we need to get its name. At least, this is what the support says. Forget the support, use the wild card!

Phew, that was it. Now, nothing can stop you from wiping out the Exchange server from your server.